Founding & the Early Years of Statehood

The site that was to become Frankfort was one of several fords on the Kentucky River, and was on one of the great buffalo trails that served settlers as early highways. The first English explorers began visiting what is now the Frankfort area in the early 1750s; and evidently the name Frankfort is a shortening of "Frank's Ford," after Stephen Frank, a settler who was killed at or near the site in Indian skirmish in 1780. In 1786, the Virginia legislature (for of course Kentucky was then still a part of Virginia at that time) designated 100 acres of land owned by General James Wilkinson as the town of Frankfort. 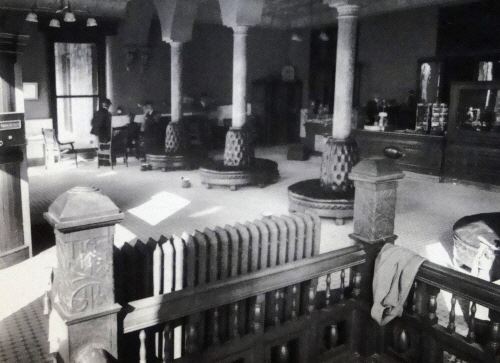 When Kentucky statehood followed in 1792, Frankfort outbid other towns (including Lexington) for the privilege of becoming the capital of the new state. The first statehouse was built by 1794, but it burned in 1813. The next capitol building was completed in 1816 and burned in 1824. Finally, what is now known as the "Old Capitol" was designed by Gideon Shryock and finished in 1830; it would remain the state's capitol building for the next 80 years.

The first half of the 19th century saw new forms of transportation: steamboats, improved roads (turnpikes), and the railroad. By 1800, Frankfort had a population of 628, second in the state only to Lexington. It grew to 1,099 by 1810, and by the eve of the Civil War Frankfort had grown to 3,702. In 1849, Frankfort achieved the status of city, thanks to the General Assembly, and in 1850 the city annexed South Frankfort.

The Civil War & After

While both North and South had sympathizers in Kentucky, the state initially took a neutral stance, and then sided with the Union. In 1862, Confederate troops invaded part of Kentucky, taking first Richmond, and then Lexington, and then Frankfort. They held Frankfort for only a month, however. To bolster the city's defenses, two forts were built atop Fort Hill on Frankfort's north side; they were instrumental when, in 1864, John Hunt Morgan attempted unsuccessfully to retake the capital city. Leslie Morris Park at Fort Hill commemorates this episode in Frankfort's history.

The years after the Civil War were sometimes troubled, scarred by racial violence-lynchings and Ku Klux Klan depredations-and political assassinations. The most notable assassination was the shooting on January 30, 1900, of William Goebel, Democratic candidate for governor following a fraud-filled gubernatorial election that the state legislature decided (along party lines) in Goebel's favor. In the four days between the shooting and his death, Goebel was sworn in as governor. Statues of Goebel at the Old Capitol and at the Frankfort Cemetery memorializes this incident.

At the same time, the post-Civil War years were a time of growth for Frankfort. The city's population reached 9,487 by 1900, and many of the buildings that now form the city's historic downtown business district were built during this period. The city began stretching beyond its historic boundaries, with growth expanding to the south (across the river in South Frankfort), north (along Holmes Street), to the west (Bellepoint), and east (up Main Street hill).

In 1905, after the Kentucky legislature had appropriated funding to build a new capitol, the public square where the Old Capitol is located was deemed too small, and a site in South Frankfort was purchased. Construction on the capitol began in 1905 and finished in 1909; the building was formally dedicated on June 1, 1910. At the time, some thought the new capitol was in a much too suburban location, being 10 blocks from the river and Main Street!

The leading industry in Franklin County at the turn of the century was distilling. This industry was hit hard by the growth of the prohibition movement that led to the approval of the Eighteenth Amendment to the U.S Constitution. In January, 1920, America officially went "dry," and the distilleries largely closed, with some exceptions for "medicinal purposes."

The first automobiles reached the city soon after 1900, and by the 1910s, car dealers, garages, and auto supplies were a growth industry in Frankfort. The automobile also spurred growth in business and recreational travel, one consequence of which was the construction of the new Capital Hotel, on the site of the previous hotel, which had burned in 1917. The building currently houses a bank and professional offices.

The Great Depression brought misery to Frankfort as elsewhere. In some respects, however, Frankfort seems to have fared relatively well. None of the city's banks failed, and the repeal of prohibition in 1933 and the subsequent reopening of distilleries in Frankfort and Franklin County gave the local economy a boost.

The post-World War II economic boom brought rapid growth to Frankfort. Between 1940 and 1970, the city's population nearly doubled (from 11,492 to 21,356), much of which was due to annexation of developing suburban areas (for example, suburban Capitol Heights, which began to grow in the 1920s, was annexed in 1950).

Given downtown Frankfort's physical constraints, there was little room for business growth without expanding beyond the core. In the early 1950s, downtown Frankfort was a crowded, diverse, busy, and vital business district. Along five blocks in the heart of town, for example-the 200 and 300 blocks of Broadway and Main Street and the 300 block of St. Clair Street-there were three movie theaters, four department stores (including Penney's-Sears was in the 200 block of St. Clair), two five-and-dimes, seven clothing stores, six shoe stores, two grocers, 10 restaurants, numerous professional offices, city and fire department offices, five furniture stores (some new, some used) and a number of small barber shops, as well as dry goods stores, hardware stores, milliners, a tailor-and the Trailways bus station. And that is not a complete list.

A big problem for Frankfort at this time was traffic congestion and lack of parking. And with all these businesses crowded into the small downtown area, neither housing developers or businessmen could have had much choice but to build outside the old area. Between 1945 and 1970, 90 new residential subdivisions were platted. The heaviest residential development in the 1950s took place on Frankfort's eastern periphery, in the East Main-Versailles Road corridor. Businesses, too, took root along East Main Street, on the ridge leading out the east side of town.

The first suburban shopping center was open by 1960, and three centers had opened by the end of the decade: two on the east side of town and one on the west.

A substantial physical change to the downtown Frankfort area was the development of the Capital Plaza complex on the site of the neighborhood known as "Crawfish Bottom," or simply "The Craw." The Craw, which city leaders considered a dangerous, blighted district, was the target of proposals for "urban renewal" beginning in the mid-1950s, and in 1958 the city began buying and clearing land in what was called the North Frankfort Urban Renewal Area. It took several years to settle on an acceptable plan for what would replace The Craw, however, but by the mid-1960s plans were made final for a complex of buildings: the 28-floor state office tower, the Fountain Place shopping center, the convention center, a new YMCA building, a federal office building, and a hotel. The construction of the North Frankfort levee was also part of this effort.

In recent years, Frankfort has followed national trends in commercial development, with much major development occurring near the on-and-off ramps of Interstate 64, populated by franchises of national chain stores like Walmart, Lowe's, Panera Bread, etc.

Conversely, downtown revitalization was led by the private sector with the restoration of numerous residential, commercial and mixed use buildings. Significant downtown construction was undertaken by state and local government, with the Thomas D. Clark Center for Kentucky History, completed in 1999.  This structure replaced a square block of older buildings on West Broadway.  The state Transportation Cabinet building at 200 Mero Street, the Paul Sawyier Public Library, the city's public safety building and Frankfort High School extension all contributed to the enhancement of our urban core.

The core of Frankfort's historic business district remains an active center of commerce, with a trend line that is perhaps more positive today than it appeared a decade ago. The appeal of the new history center; the continued efforts of groups like Downtown Frankfort, Inc.; the impetus provided by the renovation of several historic buildings for use as restaurants and specialty shops; and the reclamation of the historic Grand Theater combine to make downtown Frankfort an attractive destination for many, both from within Franklin County as well as outside it.