The heart of Frankfort sits in the Kentucky River valley, on an S-bend in the river near the western edge of the inner Bluegrass Region of the state. As a young man, Henry Clay famously compared Frankfort's geography to an "inverted hat," saying that "Frankfort is the body of the hat, and the lands adjacent are the brim." A visitor in 1855 wrote:

"From the tops of the overhanging cliffs, which environ the plain beneath like the bastion curtains of a mighty castle, the city of Frankfort and the town of South Frankfort, with their public edifices, their spires and gardens, and the graceful stream which, like a silver thread, sweeps through the green valley, are all spread out to the eye in a single view of varied and picturesque beauty". 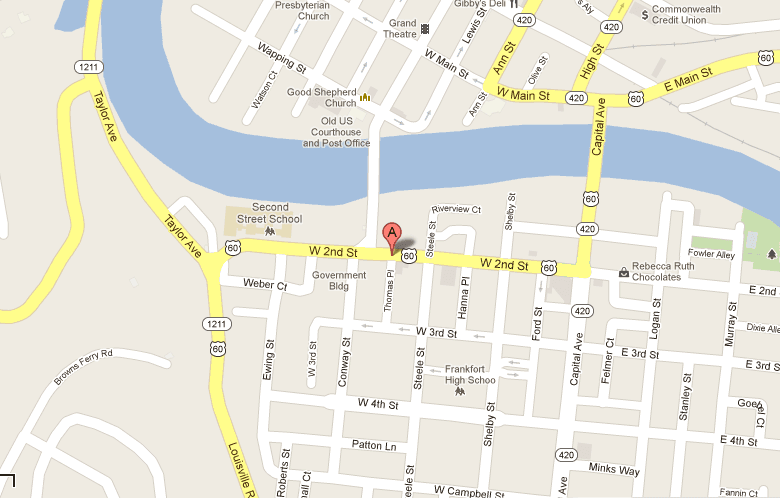 In the ensuing century-and-a-half, the city has expanded out of the river valley, growing up and over the surrounding hills.

Five bridges cross the river at downtown Frankfort. The St. Clair Street bridge (known locally as the "Singing Bridge" from the sound of tires on its grated roadway) was completed in 1894, replacing a previous wooden covered bridge. The Capitol Avenue bridge (officially the "War Mothers Memorial Bridge") was completed in 1938. The two newest bridges, which cross the North Frankfort levee, were built in the late 1980s. The fifth bridge, the so-called "Blue Bridge" at the foot of Broadway, is now limited to railroad use.

Its location on the Kentucky River has caused parts of Frankfort to flood many times. Flood stage at Frankfort is 31 feet, and the five highest floods to date have been:

The river's level can be monitored at NOAA Advanced Hydrologic Prediction Service. Two major steps to protect the city from flooding were the construction of the North Frankfort levee, completed in 1969, and the South Frankfort floodwall, which was built in the mid-1990s (and fortuitously was completed only months before the 1997 flood).